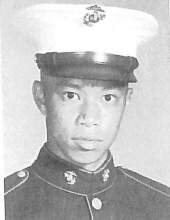 Ling Kong Louie, 69, went to be with his Lord and Savior, on Thursday, October 21, 2021, in Hagerstown, Maryland.
Born on March 30th, 1952, at Washington County Hospital. He was the first Chinese/American born at the former Washington County, MD Hospital.
He was the son of the late Foom You and Yip Chun Hung- Louie. He was preceded in death by his brother Leong Hing Louie.
He graduated from South Hagerstown High School, Class of 1970. He graduated from Hagerstown Community College and Shepherd University with a Bachelor of Arts degree.
He was a member of St. John’s Lutheran Church, where he served on the church council, property committee, coordinator for van transportation, van driver and an usher.
Ling served in the United States Marine Corps form 1970 thru 1974. He was a Vietnam Era Veteran and a proud American reaching rank of Sergeant. He served until he was honorably discharged from Marine Corps Development & Education Command at Quantico, Virginia.
He was an avid sports fanatic in jogging and sports officiating. In 1980, he finished the John F. Kennedy 50 Mile Hike- Run for the tenth time. He was the sixth person to complete that feat. He was a proud member of the “500 Mile Club.” Since 1981, he has volunteered working the race providing course support along the Appalachian Trail and at the finish line.
Ling starting officiating Little League Baseball at seventeen years old at the Halfway Little League after playing Little League and Senior League Baseball at the Doub Road facility. Sports officiating was his passion throughout his life!
He was a “life member” of Washington County Football Officials Association since 1974. He has officiated football in three different states during his 39 years. He officiated high school and recreational leagues. He was an official with the United States Football Officials Association for semi-pro football in Maryland, Pennsylvania, and West Virginia.
He was a member of the Washington County Umpires Association since 1974. In 1981, having graduated with honors from the Wendelstedt School for Umpires in Daytona Beach, FL, Ling umpired baseball in the minor leagues of professional baseball, he officiated games in the Gulf Coast, Carolina, South Atlantic, and the Southern Leagues. During his lifetime, he umpired Division I thru Division III in the National Collegiate Athletic Association (NCAA) in baseball and softball, Maryland Public Secondary Schools Athletic Association, Pennsylvania Interscholastic Athletic Association, Little League Baseball, Pony-Colt League Baseball – Softball, American Legion Baseball, Washington County Girls Softball League, Suburban and Franklin County Baseball Leagues in Franklin County, PA, Frederick County, MD, Softball Youth League, and United States Olympic national baseball teams. In his later years, he enjoyed working high school, college, and recreational levels of softball.
Since 1984, he has been a member of the Washington County Volleyball Officials Association and with the PIAA. He also officiated for the Professional Association of Volleyball Officials which provided officials for all National Collegiate Athletic Association, (NCAA).
He officiated basketball with International Association of Approved Basketball Officials. Ling was also the official timer and score keeper for basketball at Williamsport High School from 1997 thru 2014 seasons. Ling volunteered as an official in basketball and volleyball with Maryland Special Olympics.
In his lifetime, Ling has officiated more than 14.000 athletic games in five different team sports. Since Ling never married or had children, he enjoyed officiating because it gave him the opportunity to associate with the children in the sports community. He loved interacting with sports and its participants, coaches, athletic directors, league officials, fans, parents, and fellow officials.
In his lifetime, Ling and his friends enjoyed traveling all over the U.S., Canada, and Mexico. He went to the major and minor league baseball parks. He enjoyed traveling to many universities from the University of Alabama to University of California- Los Angeles; he loved to visit their sports facilities. In his lifetime, Ling attended many sporting events including Baseball World Series, Baseball All Star games, and Olympics held in Los Angles, and Atlanta.
He was a lifetime member of the Antietam Detachment of the Marine Corps League, and Morris Frock American Legion Post #42. Ling especially enjoyed assisting the Marine Detachment in the collection and distribution of toys for the Toys 4 Tots program.
He was employed by the Washington County Board of Education from 1997 until his retirement in 2014. He worked in the schools as a Behavioral Specialist and a Paraprofessional in Special Education. He loved interacting with students with special needs and dedicated his life working with the underprivileged. Previously, he worked for the State of Maryland with the Department of Social Services and the State of Maryland Division of Corrections.
Surviving him are a brother, Kowk Ying Louie, Woodbridge, VA. and sisters Toy Pin Mark of Phoenixville, PA., and Toy Ngor Quan of Philadelphia, PA. He has eight nieces and nephews.
The family will receive friends from 9 to 11 AM on Saturday, October 30, 2021, at St. John’s Lutheran Church, 141 South Potomac Street, Hagerstown, MD 21740. Funeral service will be held at 11 AM. Pastor Hoda Zavandro will officiate. Interment will be at Rest Haven Cemetery, 1601 Pennsylvania Ave., Hagerstown, MD 21742, with military honors by the Marine Corps League and the Hagerstown Am Vets.
In lieu of flowers, memorial donations may be made to St. John’s Lutheran Church.
Arrangements are entrusted to Rest Haven Funeral Home, Hagerstown, MD.
To order memorial trees or send flowers to the family in memory of Ling Kong Louie, please visit our flower store.