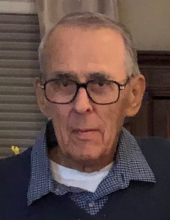 Born June 10, 1932 in Modena, Wisconsin he was the son of the late, Edwin Martinius and Selma Ingeborg (Quale) Sandberg. In addition to his parents he also was preceded in death by his wife, Dixie Virginia Lee (Sensenbaugh) Sandberg; step-mother, Ava (Jacobson) Sandberg; two brothers, Russell D. Sandberg and Edner E. Sandberg; three sisters, Irene A. Brownell, Cornetta I. Kreye and Eleanor S. Belmore.

Mr. Sandberg is refered to as a "Mustang" military slang to refer to a commissioned officer who began his career as an enlisted service member prior to commissioning. After his retirement from the Navy in 1970, he had worked as a HVAC specialist for Fairchild War Industries, Hagerstown.

Funeral services will be private and held at the convenience of the family.

Rest Haven Funeral Home, Hagerstown is assisting the family with the arrangements. .
To order memorial trees or send flowers to the family in memory of Lt. Robert Leon Sandberg, Sr., please visit our flower store.