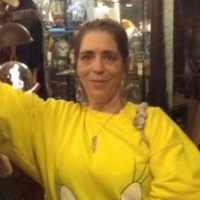 Margaret Louise Keefer, 58, of Waynesboro, Pa., passed away, Sunday, July 7, 2019 at Chambersburg Hospital.
Born November 15, 1960 in Hagerstown she was the daughter of the late, Thomas Edward and Betty Marie (Carr) Hebb.
Margaret had worked as a cashier for Love's Truck Stop. She loved bingo, yard sales and amusement parks.
She is survived by her boyfriend of 13 years, David R. Rowell of Waynesboro; two daughters, Amie M. Turner and husband, Steve and Dawn Smith and her boyfriend, Nick Rowe, all of Hagerstown; one brother, Timothy Hebb of Hagerstown; one sister, Joan Walla of Delaware; eight grandchildren and two great grandchildren.
A memorial service will be conducted on Wednesday, July 24, 2019 at 7:00 P.M. at Rest Haven Funeral Home, 1601 Pennsylvania Ave., Hagerstown.
Friends will be received at the funeral home one hour prior to the service.
Interment will be conducted at a later date at the convenience of the family.
To order memorial trees or send flowers to the family in memory of Margaret Louise Keefer, please visit our flower store.