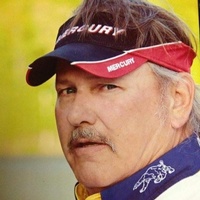 Mark Steven Bowman, aged 62, passed from this life into glory on Monday, November 12, 2018, with the love of his life, Dana, at his side. If you dont know him as Mark, he was also known as Steve, Hubby, Dad, Papaw, Biscuit, and Steamboat. Steve was born in Norton, VA. He worked at Craig Paving for several years as a dump truck driver, and retired from the City of Hagerstown as an equipment operator, places where he met many people who were very important to him. Steve never knew a stranger, and would talk to anyone, especially if it was about fishing. He was the rock of his family, and was always there to lend a helping hand or give a hug. Steve was a man in a world where men can be rare, and a family man in a family that needed him so much.
Steve was preceded in death by his parents, Harold and Dorothy Bowman, his beloved step-father Paul Jones, his sister Regina Bowman, and his granddaughter Angelica Gossard. He is survived by his wife, Dana Bowman, his children Misty (Andy) Owens, James (April) Akers, Crystal (Randy) Gossard, and Rebecca Bowman (Seb Brong), and his 14 grandchildren: Samantha Owens, Molly Owens, Holly Akers, Shane Akers, Hannah Akers, Jillian Gossard, Jon Gossard, Cassie Gossard, Emily Gossard, Paul Gossard, Kara Gossard, Juliana Gossard, Jackson Bowman, and Cataleya Brong. Steve also is survived by his brothers Lester (Glenda) Bowman and Charles (Doris) Bowman, and many other beloved family members. His close friends loved him, including Gary Rowe, Dave Roach, and Jeff Lynn (recently deceased) they were like brothers to him.
Steve was a true fisherman at heart. The water and his boat were his second home a very close second to his first. Many fish will go uncaught in the future. He attended the Church of God (Universal) in Hagerstown, MD, where he loved and was loved by so many. Steve and his wife Dana were making plans to go on their last great adventure and move back to his birthplace in in southern Virginia, but God had other plans. He will be missed so much by us, but now he can look after his granddaughter while he waits for us to meet him in glory.
There will be a viewing for Steve at Rest Haven Funeral home in Hagerstown, MD on Friday, November 16th, from 6 to 8 PM. The funeral will be held at the Church of God (Universal) chapel on Point Salem Road in Hagerstown, MD on Saturday, November 17th, at 11 AM. All who loved him are encouraged to attend.
To order memorial trees or send flowers to the family in memory of Mark Steven Bowman, please visit our flower store.