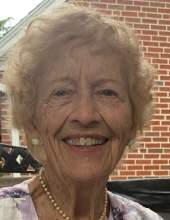 Martha Julia Eardley, 93, of Emmitsburg, MD, passed away peacefully on Monday, December 6, 2021 at Brookdale Senior Living, Hagerstown, MD.
Born on October 3, 1928 in Cumberland, MD she was the daughter of the late Myrtle (Imes) and Lyle Griffith. She was the wife of the late Clifford Ellsworth Eardley “Cliff” who predeceased her on May 30, 2018.
Martha was a long time member of First Christian Church in Hagerstown. Martha graduated from Fort Hill High School in Cumberland, MD. and attended Barber School & Cosmetology School.
Martha, who liked to be called “Marty” was an avid seamstress, winning a Blue Ribbon at the Allegany County Fair and specialized in prom gowns, dresses, costumes and just about anything she put her mind to, which helped having four daughters. She enjoyed making quilts in her later years & other sewing projects with her favorite cousin Kathy Hose. Martha enjoyed walking at the Allegany Community College track, indoor swimming & the company of her favorite dogs Dudley & Dorothy. She was a homemaker, loving mother, grandmother & great grandmother, and will be missed by all who knew and lover her.
She is survived by her children, Barbara Falco, Jackie Friend, Sondra Dorsey and husband Steve, Cammie Growden, Joseph Malachowski, John Malachowski and wife Karen; Grandchildren, Shay Dorsey, Matt Dorsey and wife Kandyce, Tyler Growden, Hailee Longacre and husband AJ, Noah Growden & wife Crystal, Jack Malachowski, Garrett Malachowski & Logan Malachowsk; Great Grandchildren, Daphne, Joel and Calvin Longacre; many nieces and nephews.
She was predeceased by brothers Robert & Jackie Griffith and favorite sister-in-law Rosemary Chapman (Malachowski).
Arrangements have been entrusted to Rest Haven Funeral Home. Services will be private and at the convenience of the family.
To order memorial trees or send flowers to the family in memory of Martha Julia Eardley, please visit our flower store.