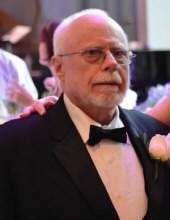 Michael Edward Engstrom, 77, of Annapolis, Md., passed away, Tuesday, March 22, 2022 at the Hospice of the Chesapeake, Pasadena, Md.

Mr. Engstrom retired in 2006 with 42 years of service with American Airlines where he worked on the ground crew.

He was a member of St. Paul's Lutheran Church, Annapolis and volunteered at the Anne Arundel Medical Center.

To order memorial trees or send flowers to the family in memory of Michael Edward Engstrom, please visit our flower store.