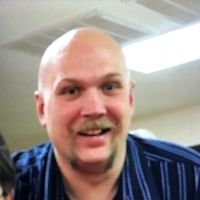 Michael Frederick Zeigler, 39, of Hagerstown, passed away, Friday, May 24, 2019, at his home.
Born September 23, 1979 in Hagerstown he was the son of, Peggy M. (Turner) Zeigler and the late, Frederick Bruce Zeigler.
Michael had worked as an associate with Martins Food Stores, Hagerstown.
He was a member of the Sharpsburg Bible Church.
He was an avid fan and manager of Summit Wrestling Alliance, Championship Pro Wrestling and Outlaw Wrestling.
In addition to his mother he also is survived by his step grandmother, Patsy Zeigler; a sister, Carrie DiGiacomo; niece, April DiGiacomo; nephew, Dylan DiGiacomio; his girl friend, Amy Geedy; many aunts, uncles and cousins including, Robert And Jackie Zeigler, Carole and Paul Huffman and Shirley Kelbaugh and his Basset Hound, Buford.
Friends will be received on Tuesday, June 4, 2019 from 7-9 P.M. at Rest Haven Funeral Home, 1601 Pennsylvania Ave., Hagerstown.
After the visitation, at Michael's request he will be cremated.
To order memorial trees or send flowers to the family in memory of Michael Frederick Zeigler, please visit our flower store.