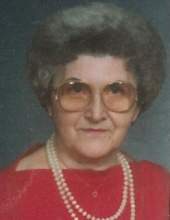 Born in Tilghmanton , MD, she was the daughter of the late Clyde and Anna Mae (Stottlemeyer) Morrison.

Patricia is survived by her children; son Dawson A. Moser and wife Debbie, daughters Deborah K. Lehtinen and husband Mike, and Vickie L. Moser, 5 grandchildren, 12 great grandchildren, and many nieces and nephews.

Funeral services and burial will be private and held at the convenience of the family.

In lieu of flowers, memorial contributions may be made to Hospice of Washington County, 747 Northern Ave., Hagerstown, MD 21742 or to Mt. Lena United Methodist Church, 21234 Mount Lena Rd., Boonsboro, MD 21713.
To order memorial trees or send flowers to the family in memory of Patricia Moser, please visit our flower store.