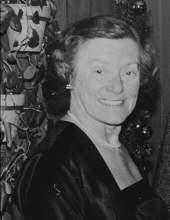 Patricianne Baldridge Slaughter born June 11, 1924, University Hospital (now East Hall), Iowa City, Iowa to Dr. & Mrs. C.W. Baldridge. She attended St. Mary’s University Experimental as well as Iowa City High School. She enjoyed many activities and clubs while attending school including, Little Hawk Weekly, Annual Club Editor, Extemporaneous Speaking Club, graduating in 1940. She attended University of Iowa, graduating in 1944 with a BA in Speech Pathology. While attending U. Of Iowa she was the recipient of the Drake Award in Creative Writing, the President of Tri Delta Sorority, served on Union Board, was a member of Zeta Phi Eta and elected to Mortar Board.
After leaving University in 1944 she interned at the Ear Nose and Throat Department and co published “An Open Letter to the mother of a Cleft Palate Child”. The following year, 1944-45, she served as a research assistant to Dr Grant Fairbanks and Elli Bronfenbrenner, in Hearing and Speech Clinic. Patricianne entered Columbia University to complete her Graduate studies and served on staff at the Hearing Clinic at the VA.

January 28, 1948, she married Lt. Stephen F. Slaughter at Fort Hood Texas, and they were stationed at Ft Holabird, MD. Stations included Monterey and Frankfurt in 1950. She worked, while in Germany for at the OS Dispersing Company.  In 1953 the couple returned to Ft. Holabird and started their family. 1955 the family was posted to Tokyo Japan and Pat taught at the American School in Japan. Returning stateside in 1960, they settled in Myersville, Maryland.  Pat volunteered as an educator at the Visitation Academy before joining the Speech Therapy staff of Frederick County. The early years were spent at Myersville, Wolfsville and Middletown elementary schools. In 1975, she was appointed Frederick County coordinator for the Maryland Speech and Hearing Association. She later, taught at Valley School, where she received the “Teacher of the Year” award, retiring from teaching in 1986.

The Slaughters retired to Punta Gorda Florida, where they enjoyed several years of social and civic service as well as sailing up and down the Gulf coast of Florida. She was active in the Punta Gorda Boat Club, the Charlotte Harbor Yacht Club and The Punta Gorda Civic Association.  In that time, she also published her book, “Manjiro” for gifted and talented 6th graders while volunteering at Sally James elementary.