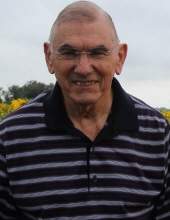 Ragan Horace Lee Shaw, Jr., "Oonie," 81, of Hagerstown, went to be with his Lord and Savior, June 9, 2020, at Brookdale Assisted Living, after a short illness of Pancreatic Cancer.

He graduated from Hagerstown High School in 1956 and entered the U.S. Navy that year. He then worked with the US Postal Service for 35 years where he retired in 1998.

He was a 50 year member of Grace United Methodist Church, being active in Christian Couples Class, Grace Ambassadors Quartet, Church Choir, and Food Pantry. He was also a member of AMVETS and Funkstown Legion Dixon-Troxell Post 211.

Ragan was a longtime umpire in the Washington County area, receiving the John Lightner Official of the Year Award in 2010. He enjoyed biking, running, golfing, bowling and was an avid Redskins, Terrapins and Orioles fan.

Ragan was proceeded in death by his wife Ecile (Carbaugh) Shaw on March 17, 2020. They started dating when they were 15 and 16 and would have celebrated their 60th wedding anniversary July 13.

While in the Navy, they wrote letters to each other daily and their love was so strong they couldn't live without each other. In later life, they became one person, he the body, and she the brain.

He is survived by one son; Brian Shaw and wife, Erica, of Hagerstown, two daughters; Kimbra Williams of Williamsport and Son in Law Tim Williams of Williamsport, Angela England and husband Christopher of Nottingham, MD. Grandson; Austin Williams and wife, Stephanie, granddaughters; Devin Jones and husband Matt, and their son Brantley Jones, Delaney England, and Ragan Shaw, one brother; Floyd Shearer, Jr. and wife Sonja of Hagerstown, and numerous nieces and nephews.

He was proceeded in death by three sisters; Kathleen Stitzel, Eileen Rider and Josephine Weaver.

Due to current COVID-19 restrictions, services and interment will be held at the convenience of the family. A Celebration of Life will be scheduled at a later date.

Online condolences can be made at www.rsthvn.com.
To order memorial trees or send flowers to the family in memory of Ragan Horace Lee Shaw "Oonie", please visit our flower store.