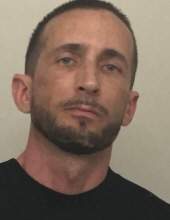 Randy Wayne Kendle, while struggling with depression, passed away unexpectedly at his home on December 5, 2020. Randy was born January 10, 1976 in Hagerstown, MD and was the son of Melford W. Kendle and Marion (Smith) Gelwicks. He was a 1994 graduate of North Hagerstown High School. Randy was previously employed by Food Lion and later by Tyco SimplexGrinnell.

His greatest joy was the birth of his son, Randy P. Kendle, who was the light of his life. Randy was a devoted single parent and enjoyed spending time with his son, especially fishing and cheering for the Ravens. Randy had a quiet and private demeanor but a generous spirit, a vast knowledge and fondness of wildlife, and an interest in history. He also enjoyed sports, particularly golfing with his dad.
He was of the Protestant faith.
In addition to his son, Randy is survived by his father Melford Kendle (wife Angie); his mother, Marion Gelwicks (husband Blake); maternal grandfather, Charles (Pete) Smith; half-sister, Jenna Rickel (husband Coty); and step-sister, Dawn Hood (husband Trevor) and their children Austin, Jaelyn, Remi, and Zaiden.
Randy was preceded in death by maternal grandmother, Peggy (Boward) Smith and paternal grandparents, Preston and Betty (Crawford) Kendle.
A memorial/celebration of life service may be planned in the future.
Randy’s final resting place will be Rest Haven Cemetery, 1601 Pennsylvania Avenue, Hagerstown, MD.
Memorial Contributions may be made to help offset education expenses for his son Randy P. Kendle, care of Rest Haven Funeral Home Inc. 1601 Pennsylvania Avenue, Hagerstown, MD 21742.
To order memorial trees or send flowers to the family in memory of Randy Wayne Kendle, please visit our flower store.