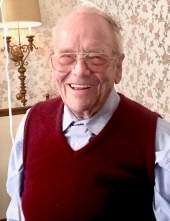 He was married to Mary Jane (Tiday) Hodges 76 years in May.

He was a pastor, preacher, and evangelist since he was 14 years old. He graduated from High School in Danville & was a math wiz. He and his wife traveled as evangelists & sang together, while he played the guitar, in every state from Michigan to Florida. He preached & pastored until 10 years ago.

In his early years, he worked the fields in Virgina, worked at Bedford Springs Hotel during WWII, worked at Fairchild in Hagerstown and Textile Machines in Reading, PA, was a business owner & home builder. He loved to talk about Jesus. When he couldn’t preach for the last 10 years, he would sit at McDonald’s & write sermons & tell people about Jesus. He will be missed by many!

Friends will be received at the church 1 hour prior to the service from 11:00 A.M 12:00 noon. Interment will follow in Rest Haven Cemetery, Hagerstown.

Rest Haven Funeral Home, Hagerstown is assisting the family with the arrangements.
To order memorial trees or send flowers to the family in memory of Rev. James F. Hodges, please visit our flower store.