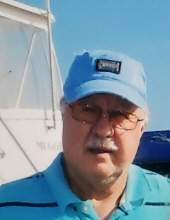 Born April 28, 1947, in Washington County, MD, he was the son of the late Russell John and Virginia Nellie (Whittington) Hutzell.

Richard was a graduate of Boonsboro High School class of 1965.

Richard worked in the construction trade for 30 years for Richard McCleary Construction. He worked as a forklift operator at East Alcoa before the business closed. He became self employed doing construction along side of his nephews and Donald, his brother and best friend.

Richard took joy working on and cleaning his truck. He liked going to Amish and flea markets. He loved eating and trying new restaurants. He enjoyed taking trips with his family to the beach.

In addition to his parents, he was also preceded in death by five siblings, Russell Amos, Charles Leonard, the twins David Lewellyn and Betty Elizabeth Hutzell and Nancy Lee Keefer.

It was Richard's wishes to be cremated. Inurnment will be private and held at the convenience of the family.

Condolences may be expressed at www.rsthvn.com.
To order memorial trees or send flowers to the family in memory of Richard Eugene Hutzell, please visit our flower store.