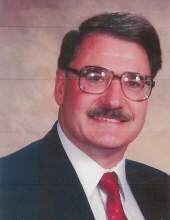 Dick was born in 1939 in Hagerstown, Maryland, the first child of Calvin G. and Anna Mary F. Troup. He graduated from North Hagerstown High School in 1957 during which time he was the school photographer. He then graduated from Hagerstown Junior College in 1959 and Shepherd College in 1963. He later received an MBA from Shenandoah College in 1985.
Dick retired in 2005 from Yount, Hyde & Barbour, P.C. where he worked as a tax specialist for thirty years. He then worked part time for Bruce, Renner & Company, PLC retiring in 2018.

Dick was not married at the time of his death. He is survived by his friend and companion of many years, Carla Kline Baker, of Winchester, VA; his sister-in-law, Nancy N. Troup, of Williamsport, MD; and several nieces and nephews. He is also survived by his two very close friends; James L. Maxey, of Murrells Inlet, SC who he met in high school in the middle 1950’s and W. Hugh Hutchens, of Harrisonburg, VA, who he met in 1965.

He was preceded in death by his parents; his brother, William J. Troup, III of Williamsport, MD; and his sister, Jane G. T. Stone, of Hagerstown, MD.

A gathering of family and friends will be held at 10:00 AM Saturday, April 17, 2021 at the Rest Haven Funeral Home & Chapel, 1601 Pennsylvania Avenue, Hagerstown, Maryland. A funeral service will follow at 11:00 and internment will be in the Rest Haven Cemetery. Pallbearers will be Bill Troup IV, Dan Troup, Roy Emmons, Mike Decker, Frank Kelly, and Chris Downs. Honorary pallbearers are Troy Hensley, David Baker and Mike Baker. Per Dick’s wishes, NO SUITS! A reception will be held at 3:00 PM at Claudio’s Pizzeria at 2644 Valley Ave in Winchester, VA.

Dick had been a member of the Boy Scouts in his early teens and felt that experience had a major influence on the remainder of his life. Dick’s wishes, in place of flowers, are that memorials be made to the Boy Scout troop of your choice or to the Boy Scouts of America, 107 Youth Development Court, Winchester, VA. 22601.
To order memorial trees or send flowers to the family in memory of Richard G. "Dick" Troup, please visit our flower store.