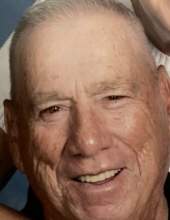 Born on January 10, 1936 in Hagerstown, Bud was the son of the late Charles Melvin and Martha Washington (Houser) DeBow. He was also preceded in death by his loving wife, Greta "Bunny" DeBow; his sons, Robert and Gregory DeBow; his sister, Patsy DeBow; and his brother, Donald DeBow.

Bud worked for Mack Truck as a Material Handler until his retirement. He served in the National Guard and was a member of the Amvets. He was a member of John Wesley Church and also attended Two Top Fellowship Church in Mercersburg, PA. He enjoyed golfing and playing cards.

Bud is survived by Zach and Zane Kennedy who were like sons to him; Bobby and Tammy Kennedy who he also considered family; as well as his brother, Charles DeBow, and various nieces and nephews.

A Funeral Service commemorating both Bud and Bunny will take place at Rest Haven Funeral Home on Saturday, June 19, 2021 at 11:00 AM with Reverend Patrick Ricker officiating. Committal will follow at Rest Haven Cemetery. Friends will be received at the funeral home at 10:00 AM.

Rest Haven Funeral Home is entrusted with arrangements.
To order memorial trees or send flowers to the family in memory of Robert "Bud" DeBow, please visit our flower store.