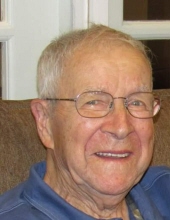 Born April 4, 1929, in Hagerstown, MD., he was the son of the late Harry Paul and Mable Marie Gearhart. He was the devoted husband of the late Joan Gearhart.

He was of Brethren faith. He was an avid lover of the water and mountains. He enjoyed swimming, boating, sailing, fishing, water skiing, and hunting. He loved playing his harmonica and singing his favorite Roy Acuff songs.

He was preceded in death by his loving wife Joan Ruth Gearhart whom he married Feb. 17, 1951, and one son, Robert D. Gearhart and brother, brother-in-law, George R. Funkhouser, B.S., M.D., F.A.C.R. and granddaughter, Wendi Lyn Gearhart.

Funeral Services and internment will be held privately at Rest Haven Funeral Home and Cemetery at the convenience of the family.

Family and friends would like to thank Hillview Healthcare and Rehabilitation Center of Altoona, PA for the loving care they provided for Robert (Bob) Gearhart.

In Lieu of flowers donations may be made to: Hillview Healthcare and Rehabilitation Center, Activities Fund, in Memory of Robert P. Gearhart, 700 S. Cayuga Ave., Altoona, PA. 16602 or to the American Lung Association, www.lung.org
To order memorial trees or send flowers to the family in memory of Robert Paul Gearhart, please visit our flower store.