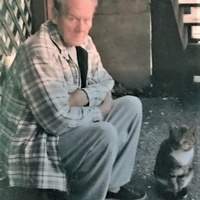 Robert Samuel Turner, 77, of Hagerstown, passed away, Wednesday February 27, 2019 at his home.
Born April 10, 1941 in Hagerstown he was the son of the late, Harvey Washington Turner, Sr. and Mabel Irene (McClay) Turner. In addition to his parents he also was preceded in death by seven siblings, Leroy McClay (Mickey), Frank McClay (Dot), William Turner (Gail), Russell Turner, Katherine Norris (Claude), Doris Warrenfeltz (Junior) and Caroline Wolf (John) and a brother in law, Gerald.
Mr. Turner was a carpenter and retired as a cabinet finisher for Hagerstown Kitchens.
His hobbies included cars and models.
He is survived by one sister Flora Buffington; sister in law, Joyce Turner and several nieces and nephews.
Funeral services will be conducted on Monday, March 11, 2019 at 11:00 A.M. at Rest Haven Funeral Home, 1601 Pennsylvania Ave., Hagerstown with Pastors Finley and Millie Berry officiating.
Interment will follow in Greenlawn Memorial Park, Willaimsport.
Friends will be received at the funeral home on Sunday March 10th from 3-5 P.M.
A special thanks to Robert Sprecher, Barbara Deatrich and all the nieces and nephews.
Special thanks to all that donated or contributed to Mr. Turner's arrangements.
To order memorial trees or send flowers to the family in memory of Robert Samuel Turner, please visit our flower store.