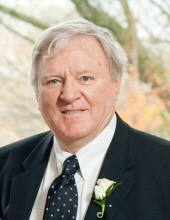 Born on February 12, 1935, in County Cork, Ireland, he was the son of the late Helen (Zulauf) and Joseph Martin Conran. He was preceded in death by one brother, Martin Conran.

Ron served in the U.S. Navy as a Machinist’s Mate on Destroyers and was discharged in 1958.

After leaving the service, Ron worked in the HVAC trade and after graduating from college he worked at the Kennedy Space Center on the Apollo Space Program.

After a long civilian career, Ron went to work for the United States Government and retired as a Senior Project Manager with the Bureau of Alcohol, Tobacco and Firearms. Ron loved to travel and visited over 70 countries, taking his loving wife Barbara with him to 50.

Ron was a member of Good Shepherd Anglican Church in Catonsville, MD. He was also an active member of VFW post 7472 in Ellicott City MD and served as Quartermaster.

Family and friends will be received two hours prior to the service.
To order memorial trees or send flowers to the family in memory of Ronald Conrad Conran, please visit our flower store.