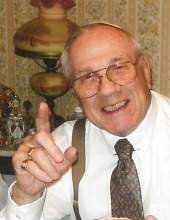 Ronnie was a graduate of Hagerstown High School class of 1952. He served in the United States Army as CPL with Company I, 87th infantry regiment, and was soldier of the month November 1954. He was a member of the Funkstown Legion Post 211.

His work history includes Henson Construction and Murray Distributing Company where he worked for many years.

Ronnie was an avid sports fan, especially Nascar racing and attended the Daytona 500 every year with his brother, nephew, and friends. In addition, he was a life time fan of the great Green Bay Packers. Ronnie was well known for his infectious sense of humor.

In addition to his parents, he was preceded in death by brother and sister-in-law, Donald "Lee" and Betty Weigand, brothers Wayne W. Weigand and Terry A. Weigand, and niece Debra Weigand.

It was Ronnie's request not to have a viewing or service.

The family will cherish all their memories of Ronnie and his ability to keep everyone laughing.
To order memorial trees or send flowers to the family in memory of Ronald Edward Weigand, please visit our flower store.