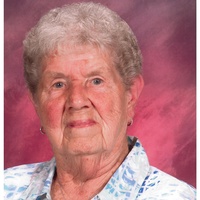 Ruth Elizabeth (Stover) Kuhn, 92, of Smithsburg, passed away on Wednesday, January 9, 2019 at Coffman Nursing Home, surrounded by her loving family.
Born September 21, 1926, in Pittsburgh, PA, she was the daughter of the late Edith Buhrman and stepfather, Keller and her father, Chester Stover.

Ruth worked for the Hagerstown and Thurmont Shoe Companies as a stitcher. She also worked in the deli dept. at the Long Meadow Super Market.
She enjoyed sewing, crocheting, and knitting, as well as vacationing; especially in Myrtle Beach.
She was a member of Mt. Bethel United Methodist Church.
In addition to her father, mother and stepfather, she is also preceded in death by her loving husband, Robert R. Kuhn, Sr.; a son, Robert R. Kuhn, Jr.; and five sisters.
Left to cherish her memory is her daughter, Nancy Boyer and her husband James of Smithsburg; two brothers, Marvin Buhrman and his wife Mert, James Buhrman and his wife Martha; a sister, Erma Leedy and her husband Kenny, all of Hagerstown; six grandchildren, Carol Ann, Christina, Tina, Jennifer, Melissa, and Ronnie; several great-grandchildren; and numerous nieces and nephews.
A funeral service will be held at 11:00am on Saturday, January 12, 2019 at Rest Haven Funeral Home, 1601 Pennsylvania Ave., Hagerstown, with Pastor Ronald Kurtz officiating. Burial will follow in Rest Haven Cemetery, where she will be laid to rest next to her husband.
The family will receive friends two hours prior to the service at the funeral home.
Memorial contributions may be made in her name to Mt. Bethel United Methodist Church, 14110 Stottlemyer Rd., Foxville, MD 21783.
www.rsthvn.com
To order memorial trees or send flowers to the family in memory of Ruth E. Kuhn, please visit our flower store.