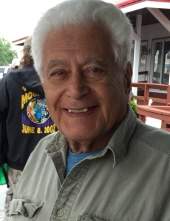 Sal is survived by his loving children Vincent and Carmela and his devoted daughter in law Victoria, along with his grandchildren Alexandra and Matthew.

He was preceded in death by his loving wife Florence, his grandson Grant, and his son in law Richard

Salvatore came to America from Catania Sicily at the age of 18. He married Florence, a marriage that lasted 57 years until she preceded him in death.

Sal served in the United States Army and was pulled from jump school during the Berlin Airlift during the Kennedy administration and served in Germany at that time.
He started his own electrical contracting/and HVAC business, while also working for the Budd Company. There was not an electrical, plumbing, automotive, or building challenge he couldn’t accomplish.

He loved Opera and sang tenor in a number of them, and also sang in the church choir. He was an avid history buff,and engendered a love of hunting and fishing in his son, along with an incredible work ethic that he passed on to both of his children. He made an impression with everyone he met and was always the life of any gathering.
To Sal, family, faith, and hard work were everything.

As an old song states, “the leader of the band is tired and his eyes are growing old, but his blood runs through my instruments, and his song is in my soul”
Father, Father-in-law, and Nono, you will be missed by all.

Mass of Christian Burial will be celebrated on Saturday, February 13, 2021 at 10:00 A.M. at St. Mark the the Evangelist Roman Catholic Church, 395 S. Ridge Ave., Greencastle, Pa. with Rev. Fr. Walter Guzman as celebrant.

Friends will be received on Friday, February 12th from 6-8 P.M. at Rest Haven Funeral Home, 1601 Pennsylvania Ave., Hagerstown with a Christian Wake service beginning at 6:00 P.M.

In lieu of flowers memorial contributions may be made in Sal's name to The Leland of Laurel Run, 120 W. Main St., Waynesboro, PA 17268 or to Meritus Healthcare Foundation, 11116 Medical Campus Rd., Hagerstown, MD 21742
To order memorial trees or send flowers to the family in memory of Salvatore Vincent Cantone, please visit our flower store.