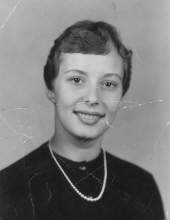 Born on May 7, 1938 in Hagerstown, she was the daughter of the late Ronald and Kathryn (Slayman) West. Sandy was predeceased by one son, Keith C. Melzer.

Sandy was a graduate of Hagerstown High School, class of 1957.

Sandy was an avid reader, and enjoyed her work as a waitress and server at many establishments. These included the Appalachian Inn, the Funkstown American Legion Post 211 and she especially enjoyed her 15 years at the AMVETS Post 10.

She is survived by her loving husband of 65 years, Jack Melzer, one daughter; Kathryn Ann Hansford of Hagerstown, one son; Bradley J. Melzer of Waynesboro, five Grandchildren; Jessica, Amanda, Amber, Courtney and Emily, and four Great-Grandchildren.

A memorial service will be private and held at the convenience of the family.

Online condolences can be made at www.rsthvn.com.
To order memorial trees or send flowers to the family in memory of Sandra Lou "Sandy" Melzer, please visit our flower store.