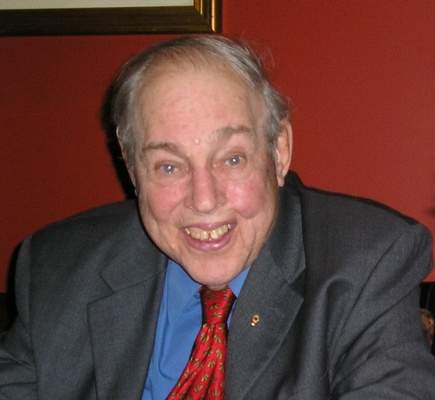 The last line from a book Stanley D. Johnson co-authored for students of Washington County Public Schools is "Well, it's time for me to highball out of here. Have fun with railroading, whatever way you wish to enjoy it." Stan's enthusiasm for trains earned him the nickname of "Kid" by his four sons: Ken, Glenn, Todd, and Colin.

Stan departed us on January 31, 2019. In addition to his four sons, Stan is survived by his wife of 60 years, Barbara Gilliland Johnson, daughters-in-law Amy and Julia Johnson, Susan Corbiscello, as well as grandson Patrick and his new wife Jenny, and two granddaughters Melissa and Courtney.

The Kid's passion for trains started early after he was born on June 1, 1931 and lived in Queens, New York, not far from the Sunnyside rail yards. His older sister Anne Cook, who currently lives in Cleveland, Ohio, could find Stan train watching from an overpass over the Sunnyside yards, which were the world's largest passenger car yard at the time. He could also cajole a free locomotive cab ride at the Long Island Railroad car floats by sympathetic railroad employees.

When Stan started third grade, he would travel by himself on New York's subway after being transferred from a neighborhood school to the Birch Wathen School on Manhattan Island. After graduating, he then took the train out to Carlton College in Minnesota to obtain a bachelors degree in economics. When not listening to lectures or working at the campus radio station, Stan could be found at the local depot watching trains of the Milwaukee Road and Long Island railroads rumbling past.

The next train adventure took Stan to Ft. Gordon, Georgia and Ft. Monmouth, New Jersey, having been drafted during the Korean War. Assigned to the Army Signal Corp from 1953 to 1955, he would make his longest travel yet. Not to Korean, but to Alaska. Assigned to the Arctic Ionosphere Research Detachment, Stan would use his observation skills. Not for train watching, but for observing the northern lights. He would help bounce radio signals around northern Alaska to establish which would function best during radioactive occurrences.

Two years later, it was another long train ride home where he obtained a graduate degree in Radio and Television at Syracuse University. By chance while conducting a workshop for educators in television production, Stan was approached by a man from Hagerstown, Maryland. He was invited to join the Washington County Public School system's experimental instructional television project. 45 schools were connected to six closed-circuit cable channels in 1956. How could Stan say "no" since Hagerstown had four different railroads to choose from?

For 33 years, he worked for the county school system. Most of this time was at the Board of Education's instructional television studios. But he also enjoyed helping students at the Career Studies Center, the county's technical high school, and teaching television production part-time at Hagerstown Junior College. Stan's appreciation for fellow train fans, railroad employees, educators and students only grew.

To give back to the community that he loved, Stan was active in many volunteering opportunities that included blood drives for the Red Cross, conducting training classes for Operation Lifesaver, and raising money through the Lion's Club. He served in many roles within the Halfway Lion's Club including president and also coordinator of the craft dealers who participated in the annual Halfway Park Day's. For some 30 years, it was a major local fundraiser held Memorial Day weekend to help finance the building of the Olympic-size swimming pool in Martin "Marty" L. Snook Park as well as other park improvements. Stan had his own track crew of four boys to help set-up and work the fundraising events.

With an all-male track crew, it was also natural for both Stan and Barb to be involved with Cub and Boy Scouting. This included the Kid being Williamsport Troop 100's assistant scout master and a committee chairman for many years. His traveling adventures only increased with hiking, canoeing, camping and backpacking trips along rivers, over mountains and near railroad right-of-ways. All four of his track gang achieved the rank of Eagle.

But it was his passion for trains that was at the forefront. Stan belonged to numerous railroad museums and organizations both locally and around the country. He would even volunteer as a conductor for the Maryland Midland Railway and its excursions out of Thurmont, Union Bridge or Westminster. His association with the Western Maryland Railway Historical Society held a special place. Joining in 1981, the Kid would help coordinate annual conventions beginning in 1982 and serve as the society's 1st Vice President in 1985 and Board Chairman from 1988 to 2015. Greeting visitors to the society's museum in Union Bridge was always a fun experience with an opportunity to share and gain knowledge about the railroad.

On Saturday, February 16, 2019 at Rest Haven Cemetery in Hagerstown, Maryland, Stan's family have organized an opportunity to share stories and celebrate the life of a true railroader. From 2pm to 4pm and again from 6pm to 8pm, the family will receive friends. Interment will be held privately at Rest Haven Cemetery.

In lieu of flowers, the family requests you consider a memorial contribution to the Western Maryland Railway Historical Society, P.O. Box 395, Union Bridge, MD 21791-0395
To order memorial trees or send flowers to the family in memory of Stanley Johnson, please visit our flower store.