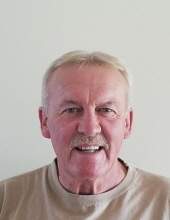 Thomas Steven Blacklin, 63, of Greencastle, Pa., passed away, Thursday, August 26, 2021, at his home surrounded by his loving family.

Born June 13, 1958 in Cumberland, Md. he was the son of Betty Lou (Wratchford) McCoy of Ridgeley, W.Va. and the late, Thomas Edward Blacklin. In addition to his father he also was preceded in death by his step mother, Marian Blacklin.

Tom retired as a machinist with Mack Trucks of Hagerstown and his hobbies included hunting, fishing and camping.

In addition to his mother he also is survived by his wife of 15 years, Donna Louise (Flowers) Blacklin; his step daughter, Sarah Johnson of Greencastle; one brother, John Blacklin and wife, Gwen of Hagerstown and a niece, Tara Palmer and husband, Bradley of Hagerstown.

Friends will be received at the funeral home one hour prior to the service.

In lieu of flowers memorial contributions may be made in Tom's name to Hospice or to a charity of one's choice.
To order memorial trees or send flowers to the family in memory of Thomas Steven Blacklin, please visit our flower store.