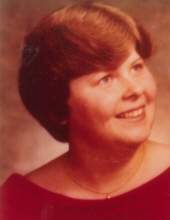 Born on September 25, 1961 in Hagerstown she was the daughter of Connie (Mertz) Hardy, of Hagerstown and the late, Richard Hardy. In addition to her father she also was preceded in death by her daughter, Lexie Caldwell; sister, Teresa (Hardy) Eichelberger; grandparents, Preston and Lucille Mertz, Wesley and Madeline Hardy; uncles, W. Lee Ridenour, Eugene Hardy and Elwood Hardy.

Tina was a 1980 graduate of North Hagerstown High School and a member of Grace united Methodist, Church, Hagerstown.

She enjoyed doing crafts and her room at Julia Manor showed how much she participated.

Tina was employed as a cake decorator for Sunny Way Market, Greencastle, Pa. and previously for Zayre/Ames Department Store, Hagerstown.

In addition to her mother she also is survived by her son, Tim (Lauren) Draper, Fairfield, Pa. and five grandchildren; sisters, Debra Pearson of Hagerstown and Sherry (Paul) Potts of Indian Mound, Tenn.; an aunt, Rosalie Mertz Ridenour of Hagerstown; brother-in-law, Ronald Eichelberger and many cousins, nieces and nephews.

Friends will be received on Thursday one hour prior to the graveside service at Rest Haven Funeral Home, Hagerstown.

The family would like to thank the staff at Julia Manor for the loving care that Tina received while a patient there. Appreciation is also given to Hospice of Washington County for their assistance in caring for Tina and Meadow Dialysis.
To order memorial trees or send flowers to the family in memory of Tina Marie Draper, please visit our flower store.