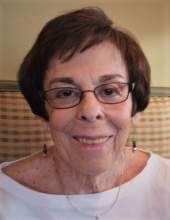 Victoria Bennett "Vicki" Firor, 78, of Frederick, MD, formerly of Hagerstown, MD, passed away in the arms of her children Thursday, August 26, 2021, at Edenton Retirement Community in Frederick.

Born December 23, 1942, in Hagerstown, Vicki was the daughter of the late Floyd S. Bennett, Jr. and Doris Bennett (Stine) Smead. In addition to her parents, she also was preceded in death by her husband, Robert Lowell “Bob” Firor, in 2008.

She was a 1961 graduate of National Cathedral School in Washington, DC, where she was known for her social and caring nature, perfect hairstyle, and ability to sleep in.

Vicki and Bob’s favorite pastime was enjoying family weekends boating and relaxing at their cabin on the Chesapeake Bay in Calvert County. They later joined the Baltimore Yacht Club to continue enjoying the Bay with friends.

Her children and grandchildren were her focus and meant the world to her. In addition to being a loving wife and mother, she retired as a real estate agent in the Frederick area making many lifelong friendships in all her endeavors. She will be greatly missed by her family and friends.

She is survived by one daughter, Aimee F. McBride and her husband, Dave McBride; one son, Robert M. Firor, II; one grandson, Kalen F. McBride; and one granddaughter, Rowen E. Firor. Also left behind are her stepsister, Sally Weiss and family; stepbrother, Howard Smead and family; and sister-in-law, Jane Firor and family.

Vicki and her husband, Bob, will be laid to rest together following a brief, graveside service at 11:00 a.m. on Saturday, September 11, at Rest Haven Cemetery, 1601 Pennsylvania Ave, Hagerstown, MD. There will be no inside gathering at this time.

In lieu of flowers, donations can be directed to one of the following entities: Frederick Health Hospice (frederickhealthhospice.org); the Parkinson's Foundation (parkinson.org); or the activity budget of Edenton Retirement Community (edentonfrederick.com) in memory of Victoria B. Firor.

Online condolences may be left after Vicki's obituary at rsthvn.com
To order memorial trees or send flowers to the family in memory of Victoria Bennett Firor, please visit our flower store.